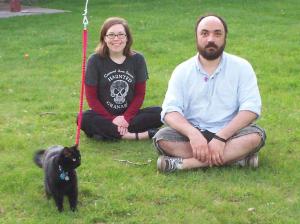 Sarah, Christopher and their cat in the backyard

I wanted to find a way to celebrate National Poetry Month on my blog,  yet it is April 17, and this is my first post. Luckily, this post is a celebratory one! It contains an awesome interview with Christopher Citro, who lets us into his rigorous writing life and adventurous temp jobs in Syracuse, NY.

Christopher is friend and colleague from Indiana University. I had the pleasure of first meeting him on a road trip from Bloomington, IN for Chicago for AWP. In Chicago, as I remember it, Christopher fortuitously ran into a long-lost cousin on the sidewalk. In all workshops, classes, lectures, and rooms where I saw Christopher again surprising coincidences were often unfolding. On his website you can find his full bio and links to his published works. I encourage you to check it out, because coming to the last line of a Christopher Citro poem is waking from enjoyable dream–you want to linger in the enthralling imagery and emotion, the depth of imagination and humor. One reading, one poem is never enough.

In the following interview, Christopher gives us a snapshot (in words and photos!) of his life and a great deal of insight in to a writer’s life, temp jobs, and empathy as underlying force of poetry.  Interestingly enough, this interview provides a great contrast to last month’s interview with Naoko, and like all the interviews so far, its inspiring. So read on, dear reader!

Can you tell us a little bit about what you write? or how you write? Are there writers you return to or other sources of inspiration you seek out regularly?

I write poems. Or I try to, at any rate.

To speak concretely, I’m currently at work on poems for my second manuscript. (My first, The Maintenance of the Shimmy-Shammy, is still unpublished, but why wait?) After leaving graduate school two years ago, my partner Sarah and I spent five nervous months living off our savings in an apartment above Main Street in a small southern Ohio village near my family while we waited for one of us to get a job to take us somewhere. With nothing but free time–and Amish buggies clopping by at 4 a.m. outside our windows–I thought to myself, if I don’t use this opportunity to get into a serious post-MFA writing groove then I’m a fool.

So I did. I set up a regular morning writing schedule along with my pint of Darjeeling. I sat in a window, listening to Lee Morgan’s 1966 album The Rajah on my headphones, and writing for an hour two each morning. This ended up being one of the most fruitful writing periods in my recent life and produced the bulk of the poems which are forming my new manuscript.

I also made a writing webpage for myself. I debated doing so for weeks, as it felt kind of silly and narcissistic at first, but I’m glad it did it. If you’re not teaching, it can be hard for editors and people to find you. I’ve found that a webpage for my writing has helped me with receiving solicitations and making connections with fellow writers over the last couple years that I don’t think I could have done otherwise.

In addition to Darjeeling tea, and Lee Morgan’s jazz, my other sources of inspiration included the life of the town outside my window, the golden slide of summer into autumn, and a revolving selection of poems which I’d dug out of some of our moving boxes for inspiration. I leafed through recent copies of Indiana Review. John Berryman’s The Dream Songs was a major companion, especially for his speed and sense of rhythm and movement down the page. I started reading the poetry of Matthew Zapruder and Tony Tost, along with old favorites like Wallace Stevens, Jim Harrison, Mary Ruefle, and D. Nurkse.

Since moving to Syracuse, where Sarah eventually found a job, I’ve continued working on my second book, revising the poems begun in Ohio, creating new ones, and listening to the poems as they suggest what shape the book as a whole might eventually take. It’s a rather inchoate thing right now. And I think that’s good for now. My Ohio poems are a pile of throbbing stem cells, only just beginning to specialize into the organs and systems of a new book. And I keep making new ones to add to the heap.

When you write in the mornings for two hours, does that include revising poems, or only generating new material. Do you have  favorite time of day or regimented way to make sure you are sending out your poems to magazines?

The simple answer is: when I’m writing I generally write new poems in the morning and revise/submit at night. Every poem I write is the result of free-writing–an intuitive, unplanned pouring of words onto the page–and I have found that as I get older my brain is more limber and likely to make interesting, energetic leaps if I write shortly after waking.

I’m sort of always revising: in my head with new poems or poems I’ve been struggling with, in the margins of my handwritten journal where I write my first drafts, while typing the handwritten drafts into my computer, with printouts taped to the wall, or when I open poems up on my computer throughout the day.

When I’m in a writing groove, which is most of the time, after Sarah goes to sleep I’ll spend an hour or two or more revising and sometimes submitting. I’ll spend time working on my submission spreadsheet, researching new journals, revisiting old ones, looking for submission calls, reading online journals, reading book and journal reviews, and just generally splashing around in the rich digital waters of contemporary literature. Then when my fingers get all wrinkly and waterlogged, I turn everything off, pour myself a nightcap and read from a book of poems or whatever novel I’m in the middle of. To an outsider, this probably looks like obsessive behavior. To me, an insider, it’s clearly obsessive behavior. And I love it.

What do you do besides write (to pay the bills)? How did you end up doing that? and how does it influence/interfere/inspire your writing life?

If I were on my own, finance-wise, I’d probably be in the gutter, or curled up muttering in a fetal position in a loving family member’s attic. Since finishing my MFA program, I’ve been largely unemployed. Thankfully, I have a caring and generous partner who has a good job which more or less keeps us and our cat in Tender Vittles, chicken thighs, and whisky. I have very few expenses and have stripped down what I need to live to the bare minimum. Living as a graduate student helped this process, but living even broker subsequently has really tightened things.

Job-wise, upon arriving here, I signed up at half a dozen local temp agencies which have found me a total of two jobs for two months in the last year. 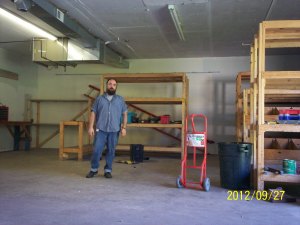 The first one was a manual labor job helping to dismantle a cell phone tower installation tech center. The supervisor let us take a some of what was left in the office, so I got a nice leatherette desk chair, some unused sticky notes, a ladder, and a case or two of printer paper which I use for printing poems. I’m not sure what I’ll use the ladder for. From the supervisor, a pompous and unsettling old man from Chicago, I got an interesting anecdote which I wove into a poem I was working on at the time. 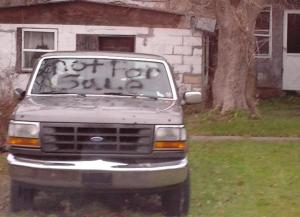 Over this last winter, I worked as a delivery person for a compounding pharmacy, filling in for a driver who’d had a heart attack. I motored all over central New York, making deliveries inside the homes and basements of the very rich and profoundly poor. The only common dominator was that everyone was, or had someone in the family who was, seriously and gravely ill. One minute I’d be in a glittering mansion on the shores of a Finger Lake, and immediately after in a rusty trailer with an obese man with one leg telling me it’s a good thing I don’t knock like a county sheriff. (I made a mental note to be sure never to do this.) 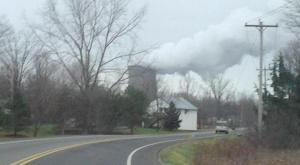 The view into the homes of my fellow humans here was actually quite moving. I can’t say at all in what ways it has already or might enter my writing, as that kind of thing often takes time for me, if it happens at all. Memories and experiences pop up in poems quite unexpectedly after months and years. And in general I like to write from my sheer imagination, rather than as a form of nonfiction notation. My own penchant for recording the details of my life meant that for most of this delivery job I kept an audio diary while driving between deliveries, and took lots of pictures along the road. I may use these someday for an essay. As far as my poetry goes, I imagine the things I saw (hand guns strewn between cereal boxes on dinner tables, an old lady who couldn’t get out of bed so she kept her bed in the kitchen, charming couples caring for one another as best they can) will find a way in one way or another. If for nothing else, it’s been a serious anti-cynicism aid and a push to maintain the kind of empathy without which good poems don’t really come alive.

Whether or not I’m working I always make it a point to keep writing–and I’m usually pretty good at this. When I have free time, it’s a joy to lose myself in the dream world for days on end. When I am busy working 40-plus hours a week, it’s a way I keep my sense of self and my enthusiasm amid exhaustion and the sadness of using the most productive hours of your day to create things for someone else instead of making poems for yourself.

Though I’m not working in academia these days, I’d ultimately like to return. I miss teaching very much, and rewarding jobs in publishing are thin on the ground here in Syracuse. Of colleges and universities there are a-plenty. 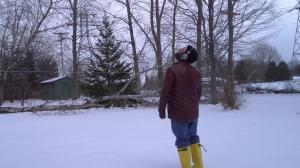 In the meantime, I do whatever temp jobs I can find, hope I don’t get sick (no health insurance)  and write as much as I can. I also make sure to submit my work fairly regularly. Being broke, I haven’t been able to afford to submit my first book to many presses, as they almost all charge, even for open reading periods. But I’ve found a few. And I try to keep sending poems out to journals. I pet my cat a lot. I read. I cook strengthening and nutritious dinners for me and Sarah. I look out the windows and wonder if it’ll ever stop snowing.